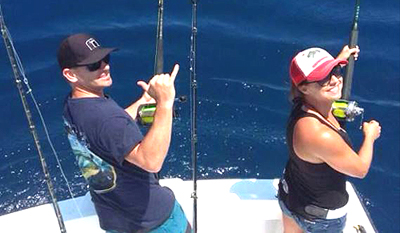 With 37 teams and 168 anglers from 18 different countries, this year’s OWC was one to remember. Participants competed for one of the most exclusive titles in tournament fishing in the world.

On each of the four days of the Offshore World Championship, teams departed from Marina Pez Vela, about 60 kilometers down the coast from the center of Jaco, Costa Rica. From 7:30 AM to 3:30 PM local time each day, expert anglers dropped their lines into the ocean and played exciting tug-of-war games with fish that were often larger than the average man!

Costa Rica is well-known throughout the world for its eco-tourism, drawing fish enthusiasts and professional anglers from countries around the globe to its beautiful beaches. The waters off its “rich coast” teem with an abundance of billfish year-round, including Pacific sailfish, yellowfin tuna, marlin, dorado, and wahoo. This makes it the perfect country to host the largest and most prestigious sportfishing tournament of the year.

Over the course of the 2022 OWC, a total of 673 billfish were released for points. The tally included 606 Pacific sailfish, 65 blue marlin, and 1 each of black and striped marlin. The teams wrestled and reeled their catches in and then used video verification to score points on the fish.

In an incredible come-from-behind victory on the final day, Team 22 (who qualified at the Watamu Fishing Festival) from Kenya took home the top prize in the tournament. Steve Harries and Florian Biziere were the top two anglers of the entire championship - each releasing 6 sailfish and 5 blue marlin - and both were members of this winning team.

Second place went to Team 11 from New Smyrna Beach, Florida who were the 2002 OWC Champions. Their strong showing throughout the tournament concluded with 10 sailfish releases on the final day. Another dramatic finale came from Team 18 from Croatia, who reeled in two sailfish in the last two minutes of the final day’s fishing time to squeak ahead.

Other 2022 Billfishing Tournaments in Costa Rica

Places like Quepos, Los Sueños, and Jaco, Costa Rica are ideal spots for sportfishing. Their high density of game fish, excellent weather, and unparalleled landscape beauty create the perfect environment for tournaments throughout the year. Here are the billfishing tournaments held in Costa Rica in 2022:

Sportfishing for Hobbyists and Amateurs in Jaco, Costa Rica

Even heading into the rainy season, visitors to Jaco, Costa Rica continue to take advantage of fishing charter trips by Adventure Tours Costa Rica. The success of the Offshore World Championship is proving to be a great indicator of fruitful casts for non-professional anglers this season.

Stay up to date on the sportfishing seasons with our regular fishing reports!