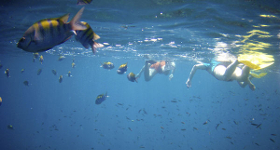 Explore the islands of Costa Rica for outdoor adventures from world-class scuba and snorkeling to unique wildlife habitats and nature trails through unspoiled tropical terrain.


With white-sand beaches and clear turquoise waters, the Tortuga Islands resemble a Caribbean paradise more than a Pacific getaway. This serene beauty makes it one of the country’s most popular island stops. Book a catamaran tour and cruise to the balmy isles that feature some of the area’s best snorkeling and scuba diving in waters teeming with colorful fish. The main island in the group, Tolinga, is home to a variety of watersports such as wave runners and banana boat rides, and also welcomes with laid-back seaside eateries, nature hikes through lush foliage and plenty of places to ease back and relax on scenic beaches. You can also set off on a local boat to explore the surrounding uninhabited islands.

Diving and snorkeling are the big draws to the island that lies around 20 kilometers off of the Osa Peninsula. With a protected inshore reef that boasts near year-round visibility of about 20 feet, you can get up-close looks at dolphins, manta rays, sea turtles and migratory whales, largely found between July and October and from December to March. The undersea sanctuary was set aside as a protected biological reserve in 1978. On land, the beaches welcome with plenty of space to spread out and enjoy the shores that also serve as a nesting ground for sea turtles. While the island isn't as lush as others, it’s home to a wide variety of migratory birds that are of great interest to birdwatchers.

Another top spot for divers, the Bat Islands (or “Islas Murciélagos”) have water temperatures that are consistently in the 80-degree range and visibility that’s anywhere from 20 feet to up to a hundred depending on the condition of the currents. The waters are frequented by massive schools of fish such as snappers and grunts as well as large populations of manta rays. Best suited for experienced divers, areas with bull sharks are also a main attraction that brings in top underwater photographers to capture images of these magnificent creatures that are not found in such numbers in other Central Pacific waters.


The small secluded island by the tip of the Nicoya Peninsula is a great place to snorkel and kayak in its surrounding waters. The trip to a disembarkation point takes you through a rural stretch of scenic landscape. Watch overhead as massive flocks of pelicans are apt to cross clear blue skies. But what makes Cabuya truly unique is its ancient island cemetery. At low tide, you can walk to the burial site that was first used by indigenous inhabitants in pre-Columbian times. The peaceful place, which is still used for the dearly departed of locals today, offers sublime views in a serene setting.


Tour Costa Rica’s most infamous prison with a trip to San Lucas. Dating to the late 1800s and often compared to Alcatraz, the now-shuttered maximum security penitentiary once held the region’s most hardened criminals just beyond shark-filled waters. Visit cells with walls featuring art from its unwilling guests. But being Costa Rica, nature has since encroached on the concrete complex to create a fauna-filled habitat for monkeys, whitetail deer and colorful iguanas.

Set more than 500 kilometers off the mainland, Cocos Island is not the easiest isle to reach. Those who make the journey are rewarded with an isolated nature paradise. The entire island is designated as a national park and features some of Costa Rica’s most stunning scenery as well as diverse wildlife. Walk nature trails that traverse tropical lowlands and a cloud forest. The island’s waters feature dozens of different corals and hundreds of fish species that make it a world-class scuba and snorkeling destination.

So book yourself a catamaran charter and head to some of the best places to visit in Costa Rica to enjoy once-in-a-lifetime nature excursions.