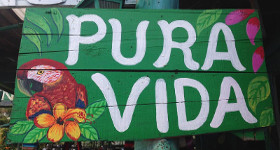 From adventure trips and rainforest tours to atv riding, talk like a Tico when you visit Costa Rica with a few local Spanish phrases.

Common Words for the Community

He's My "Mae": Like its English counterpart "dude," the word "mae" [pr: MY] is best used around younger people and frequently dropped into just about any sentence. "Aw mae! Mae, I just met this crazy mae."

Watch Out for the "Guachiman": Derived from an English word and used across Latin America, the "guachiman" [pr: watch-EE-man] is exactly what it sounds like -- a Watchy Man. If you rent a car, you're bound to come across a guy who offers to watch the vehicle after you park. It may seem dubious, but it’s quite normal. Putting some spare change into local hands wouldn't hurt.

Kick Back with "Pura Vida": You're sure to hear "pura vida" [pr: POOR-ah VEE-dah] quite a few times in a variety of situations. Literally translating to "pure life," this handy phrase embodies the relaxed Costa Rican lifestyle and is used as a greeting, to say goodbye, "thank you," "you're welcome" or just "great."

All is Chill and "a Cachete": Much like "pura vida," Ticos express that something is beautiful, great or convey that all is well by saying "a cachete" [pr: ah kah-CHE-tay].

Everything is Totally "Tuanis": Looking for a cool way to say "cool?" How about tuanis [pr: TWA-nis]? Among the many theories of the word's origin, some say it comes from the English phrase "too nice."

Spanish Expressions to Pair With Partying

When Will This "Goma" End?: While it also means "glue," a "goma" [pr: GO-mah] is more likely to mean a hangover in Costa Rica. On the morning after a big night out, feel free to lament, "Tengo una goma."

I Need My Morning "Yodo": You probably know that the word "cafe" means coffee in Spanish, but why not order your morning joe like a local? It literally means "iodine" in Spanish, but "yodo" [pr: YO-doh] is used to refer to the equally dark coffee.

Are You "al Chile?": Tico's most likely aren't referring to the country when they say, "Al chile" [pr: CHEE-lay]. It's used to ask "really?" and "seriously?" or to affirm the same.

Why “Diay?”: You almost can't go wrong dropping a "diay" [pr: DEE-aye]. The multi-faceted word is used as a filler to mean "well," "hey," or "clearly," also to express doubt, or confusion akin to “what happened?”

"Chunche" Explains it All: One of the most useful slang words to know, "chunche" [pr: CHOON-chay] is a "thing" that is used to refer to almost anything. So savor that “chuche” at a Tico restaurant, be sure to bring a “chunche” on your zipline adventure and carry a “chunche” as you explore rainforest waterfalls.