As we leave behind the rains of the green season it’s clear skies, calm seas and a bounty of inshore and offshore fishing out of Los Suenos Marina.

Dorado Season on the Rise

It’s November, which means that anglers looking for some of the Pacific’s best table fish are heading to our waters. While there’s plenty of variety to bring home for the dinner table, right now it’s all (well, mostly) about dorado. Traditionally, and how the season seems to be shaping up right now, we see a big influx of dorado in October and the high numbers hold until December, tapering off somewhat in January and February.

Where do we find them? Everywhere! Specifically offshore while trolling for billfish we can almost guarantee they’ll go for the bait and it’s not uncommon to bring in ten or fifteen in a round. Just a few miles out, say ten to fifteen, current lines are nabbing them in nice numbers too. And as we’re right now in a shoulder season, going from the green months to the dry, we still come across floating debris that often have a treasure trove of the tasty guys hiding underneath.

Even the faces of the most seasoned anglers light up when hooking a dorado. It’s always a show when these brightly colored fighters get acrobatic on the line. While the catch is thrilling, the taste is probably what keeps them going for more. Baked, grilled, in ceviche or as sushi, dorado is one of the more versatile fish for an amazing meal. 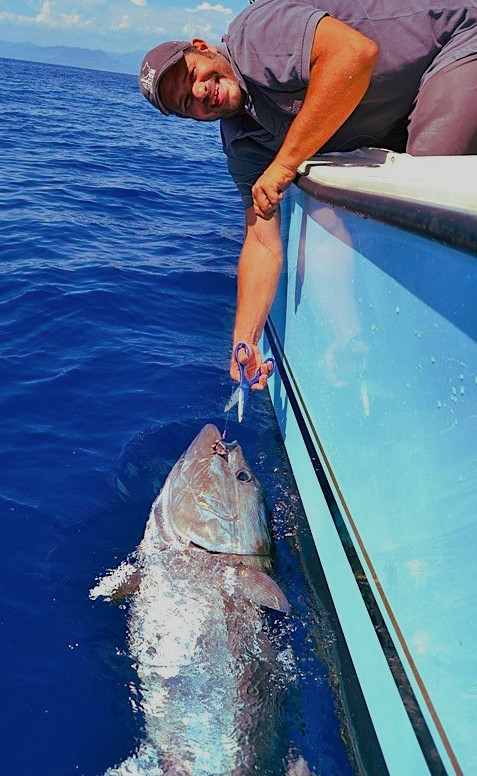 Is it Still Tuna Time?


Yes and no. There are always yellowfins in the Central Pacific waters. If that’s what you’re going for, we’re almost sure to find them. But we’re kind of in the mid-range season for tuna right now. We saw some higher density over the past few months, peaking in September and tapering a little last month. Traditionally we’ll get a “lull” that starts in January and then things start to pick up again in April. But if we spot pods of spinner dolphins, at any time of the year, it’s almost a guarantee that there are lots of tuna traveling alongside. Most common is in the 30 to 40-pound range, but live baiting we have been landing some in the 80 to 120 range, even as late as February last year.

Like tuna, there are always some pretty good sailfish opportunities in these parts. But we see fluctuations. While going after sailfish is always a solid option, we do (and have this year) see their numbers fall from about May to mid-October. Right now we’re just at the start of the ramp-up period that, if last year was an indication, really gets going next month and stretches into April, falling off a bit in May as we head into the green season.

Lately, boats are seeing about four to eight hook-ups a day, and it’s not unheard of to get double and even triple hook-ups. Expect those numbers to triple come February when we’re smack dab in the middle of peak density time. Only marlin outmatches these strong and acrobatic catches when it comes to aerial battles when hooked.

Blue and Black Marlin Are Here!


Now we get to the big prizes that bring pro anglers (and heck, even first-time amateurs) to these parts. Marlin! Just as we saw from mid-April to June, this past month and right now we’re seeing marlin numbers rise.

Offshore the influx usually peaks towards the end of November and the height holds through December. Blue marlin, usually in the 300 to 400-pound range, are the more common in offshore waters, followed by a nice amount of striped in the mix. The stripeys are averaging in the 150 to 200-pound range, and you can argue their lighter size make their aerial leaps all the more amazing when you’ve got one on the line. Black marlin are rarer, but we do come across massive ones in the 500-pound and up range both offshore and inshore.


A lot! We’re talking about roosters, grouper, huge amberjacks, and yellow snappers. The rocky inshore reefs are fertile grounds for blue trevally, rock snappers, mackerel and lots and lots of cuberas. And, with some patience and a little luck, you’ll come across a humongous black marlin lurking along the inshore shallows.

Fishing charters fill up fast, especially with the upcoming high-density seasons, so contact an agent today to reserve your big game fishing trip of a lifetime out of the famed Los Suenos Resort near popular Playa Jaco.